Today our little Scooter boy is 12!! We love our "cuterest and funneerest" boy!
He makes us laugh alot.
Pictures to come. Technical difficulities with the puter.....*sigh*
Posted by Sunny,Scooter, (sometimes Jamie) at 12:00 AM 36 comments: 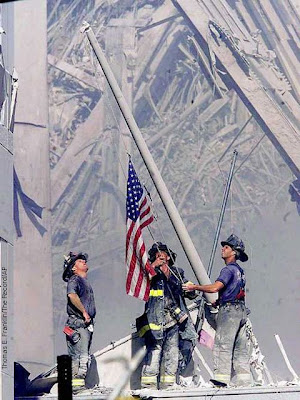 We will remember...today and everyday for the rest of our lives. 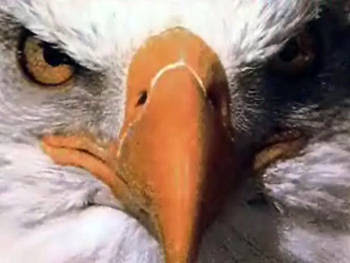 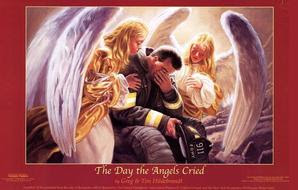 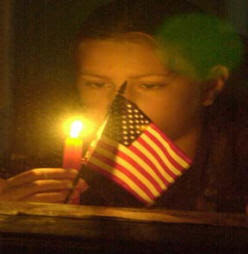 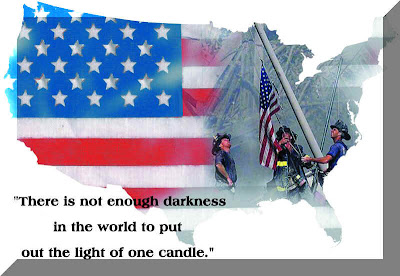 8 years ago pure evil visited us here in this United States of America. In NYC, at the Pentagon and in the fields of Pensylvania cowardly terrorists took lives and thought they would bring this country to it's knees. The only knees bent were those to pray. They just didn't know who we are as a country.
We Americans may quarrel, disagree vehemently over many issues. But, when faced with something as vile, despicable and deadly as the attacks upon us on September 11, 2001, we come together as one. That is exactly what we did and 8 years later, let us all remember that coming together. Let us remember so that we may always know, no matter what our differences are, that we are first and foremost all members of this great nation. A nation that has paid and continues to pay with our blood, sweat and tears.
The war on these cowards continues... they just didn't know what they started.
Yes, we must never forget. Not ever.
Posted by Sunny,Scooter, (sometimes Jamie) at 10:27 AM 13 comments: 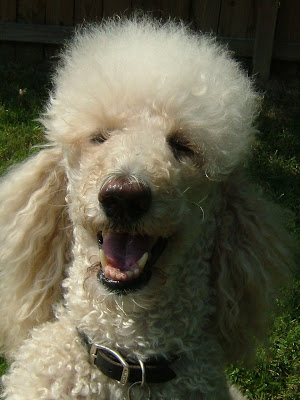 Well, hi guys. How is your 09/09/09 going!!!! Mom says it only happens every now and then that all the numbers match up but personally I don't find it quite as interesting as she does... Sorry Mom. Then again she doesn't like trying to get tree lobsters(squirrels). Se la vie. Different strokes and all that. I digress, however.
Scooter's birthday is coming up on the 13th. He will be 12. He made me such a nice card(well, for him) and wanted to surprise me on my birthday. Sooo, I want to do the same for him. He is a pain sometimes, but has such a sweet innosense. He's all "what, me worry?" (Hmmmm Mom says a famous magazine dude used to say that. Cover boy of MAD magazine. Do they publish that anymore?? Uh Mom digresses once again. sheesh mom, can we stay on topic????? Apparently her mind flits around as in ooohhh look at the pretty butterfly....AHEM)
As I was TRYING to say, don't tell Scooter. He doesn't realize his birthday is coming. His mind is full of "tawking" to Tan Torkelson, looking for ufo's in the yard and who knows what else.
(I don't know why neither of our birthdays made it into the DWB b'day box, but no worries.)
So Mum's the word so we can surprise Scooter! Please help me wish him Happy Birthday on the 13th! 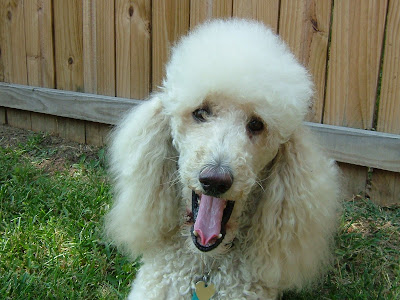 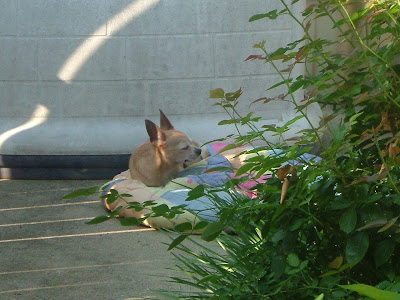 (see he's out there squinting his eyes up-tawkin to tanner he says....)
Now, about me! It's been on the boring side around here. Mom has looked at a couple places, but nothing yet. Apparently we have more time to find a place than we thought.

I wish Mom had gotten pictures of the day Scooter went missing. Most excitement we've had around here in awhile. She's calling and calling him. Looks in the yard, looking ALL over the house. (Scooter does NOT come unless he feels like it)

As we were walking around the house, Mom was starting to panic. Then, once again, who came to the rescue??? Well, of course, moi. I walked straight over to an open, partially packed box and sat down beside it. Do you think Mom had the brains to pay attention to what I was trying to tell her???????? Duh-poor mom, she just doesn't have the intelligence I do.

Then I stood up and stuck my nose in the box> She's all, SUNNY WE HAVE TO FIND SCOOTER!! Stop playing around!!!

I'm all TRYING to tell her, uh crazy woman the twerp is in this box hiding from you and you won't listen.

Finally I goosed Mr. "I doan haf tu do nuffin I doan wanna" aka Scooter and his head popped up.

He had hopped in, nested in a couple towels and was sleeping. He HAD woken up and was just ignoring Mom, roaching on the towels.(He is not hard of hearing-he just doesn't mind)

Long story long....Mom FINALLY realized what I had been doing the whole time. I got cookies!!

AAACCCCCKKKKKK Blogger will not let me upload pics -it says due to internal errors. GEEEEEEZZZZZZZZZZZZZ Mom may throw this puter out the window someday!

Too bad, I had some lovely pics of myself....Mom says she doesn't know if it is her blankety blank pooter or blogger...bah Guess we'll try later. Did you know we missed our blogaversary in Aug?? Guess dillos don't recognize the importance of those things!

Power of the paw needed

The Airedales (3!) and their folks over at http://airedaleheaven.blogspot.com Need all our prayers, zen, purrs, terrier tenacity and howling to the heavens. The aire girls dad has a condition that has no cure and is not doing well. He has breathing troubles like our gramma did. Please go by and give them some of the great DWB support. Since it has been so recent for me, I KNOW how much it helps.
Hugs
Jamie and the kids
Posted by Sunny,Scooter, (sometimes Jamie) at 3:15 PM 9 comments:

so ok anok. i dunno whut this heer labur daze is abowt. i doan fink aneewun duz efereebuddee iz not at that werk plas,whutefer that iz. mom sez shee will be goin to werk somtimez purtee soon. i amember wen she useded tu go thar an i doan like it. but ok anok, we wil jus see. 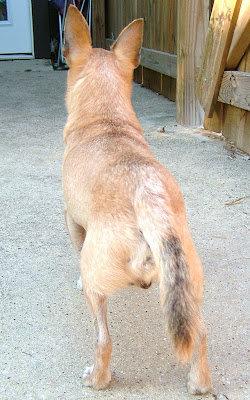 How mom became an armadillo

Ok, here goes. My Mom became an armadillo awhile back. After Gramma died, her purpose was gone(so she thought) She had been looking after gramma since her daddy got killed. 11 years ago. Since he was killed in a tractor accident when he went out to Mom's place to bushhog her 2 acres, she felt real guilty for awhile. But she got over that. She is not sure to this day if gramma blamed her for it. She said no, but mom wondered if she did deep down where nshe might not even know.
So, mom knew it was her job since her other 2 sisters were not in the area. Mom and gramma butted heads alot. Her husband spoiled her all their 56 yrs of marriage. Guess love like that is hard to come by.
After the dust had settled, memorial was done(Mom found it strange that she had a hard time leaving the urn...)Older sister-was in charge. Then younger sister came in June. An estate sale was arranged. Big sis had to leave before July 4, so wasn't here for sale. Little sis had her own things to do. (She has a house here and needed to clean out a shed and send her things to CA.
Well, the time came for sale. Mom's Dad was Air Force, so there wasn't a "home Place". Mom realized though things are just things, most of them were "home" for her. That from Okinawa, that from Greece, Germany.Ohio, etc. She knew she couldn't keep everything so she tried not to keep too much.(and of course 2 sisters, grandkids too) At first she brought tons over to her side, and then realized she couldn't-ha-she schlepped back and forth many times. Kinda comical.
Well, sale weekend came. She stayed on her side most of the day-but couldn't help look out and watch her "home" being carried out. She leaked. Finally, she decided she should go over for just a minute. (Mom NEVER wears dresses, but gramma was a classy fashionista. So Mom got dolled up in a dress that she had gotten from gramma's, makeup,hair and went over to "represent". She figured if gramma happened to look down, she'd be proud. She happened to go at a time when a couple were buying a set of bronze/lacquer eating utensils Thailand. He was a Navy brat, they had only a few pieces left, and it brought back memories for him since they had used it on special occasions. Her set was missing none. She teared up, he teared up. She was happy for the first time becase part of her home was going where it was part of his too. She made 2 new friends that day.
OK, so the sale got over. Little sis left shortly after, but Mom didn't see her but a couple of times because she was staying at her house, getting it ready to rent, and visiting her friends.
Well, Here's the armadillo part. They are slow moving, you don't see them during the day much. They have fierce claws which they use to dig for food with or protect their young. They have a hard shell except for their belly, which is soft. If they are in danger they roll up and can "play Possum". A long time, mom's seen it. Mom knew one dog that could break it's shell. A Dobe named Beau. Holy cow. Awesome.
I don't know why(may have started out with one of her trademark falls that really hurt), she was supposed to stay with her legs elevated, ice, yada,yada. well somewhere along the way-she rolled up.
She fed us and let us out of course. But left the house only when she had to. She was having dreams of when gramma had left. She could not get it out of her head. It snowballed and she just couldn't see any point. Thank Dog for Scooter and me.
Anyway,that has lasted awhile. But about a week ago, she unrolled. Couldn't tell you why. Nothing changed. Maybe it was the praying. (Mom here. I know not everyone believes, but I do-even though sometimes it is hard to keep on doing it. I hope everyone has doubts sometimes...)
So, there you have it. Mom is not a racehorse yet, but she's getting there!
OK-trivia(if anyone is still reading) Dillos are called Texas speed bumps around here. #1 road kill. Pic below shows why. They do not see well. When startled by the car they jump=about bumper high. RIP jumpin dillo

I could tell you soooo much more about these mammels that have existed for eons. But I fear if you haven't left already, you're sound asleep. WAKE UP!!! It's over.
We are going to try hard to catch up. We have missed all of you.
Hugs,
Sunny
Posted by Sunny,Scooter, (sometimes Jamie) at 5:24 PM 19 comments: 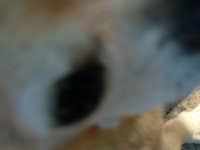 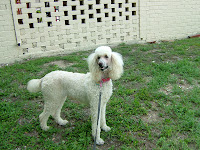 Letting y'all know we are actually alive. This weekend I plan on getting back in the groove and catching up with our buds we have missed.
Joni Mitchell wrote a song that is beautiful, yet plaintive. This is the final verse.

Tears and fears and feeling proud,
To say I love you right out loud.
Dreams and schemes and circus crowds
I've looked at life that way.
But now old friends are acting strange.
They shake their heads, they say I've changed.
Well, something's lost, but something's gained
In living everyday.
I've looked at life from both sides now,
From win and lose and still somehow
It's life's illusions I recall
I really don't know life at all.

Just thought I'd share. Been playing in my head for awhile now. Our next post will be about a Texas icon. The armadillo.(Please,please. Try to keep your excitment in check....)
Hugs
Jamie & the kids
ps. I dunno WHY this blankety blank puter, The NEW one with blankety blank VISTA won't let me put a pic on. I click away at add an image and nada happens... aaaaacccckkkkkk
AHA I got 2 pics on. sheeeesh. Goodnight. Finally.........hours later......
Posted by Sunny,Scooter, (sometimes Jamie) at 8:12 PM 10 comments: